Sarson ka saag or spicy mustard greens is a traditional North Indian saag to cook. Mustard greens are cooked along with onion, ghee, and other leafy vegetables. Making in an instant pot this saag recipe is very easy to make and come under 30 minutes.

With an aromatic tempering of garlic, cumin seeds, and ghee, this Punjabi Sarson da saag is a winter delicacy.

Best served with Makki ki roti, a cornmeal flatbread prepared to go along with saag. It is similar to cornmeal tortilla preparation.

Winter is the season where so many seasonal recipes are common to prepare, like palak paneer, peanut chikki, til khoya laddu, carrot halwa , gond ke laddu, & this Sarson ka saag.

In winter mustard greens (Sarson leaves) and bathua (chenopodium) leaves are easily available in the market with other leafy vegetables like spinach, fenugreek, radish, and turnip greens.

That is the reason serson ka saag is a must to cook in winters. When mustard greens and bathua (chenopodium) leaves are not available we can easily replace it with kale, collard greens, and spinach to balance the pungent flavor of mustard greens.

It is one of the best one-pot meal served with Makki ki roti with ghee for authentic Punjabi thali.

What is Sarson ka saag

Punjabi Sarson ka saag is a preparation of cooking mustard greens along with other greens spinach, bathua (chenopodium), radish greens, and fenugreek.

"Sarson" is a Hindi name of mustard, and "saag" means creamy spicy greens. Saag is named after the main green leafy vegetable used to prepare it.

Mustard greens and bathua (chenopodium) have a little bitter taste. To compensate its bitter taste other leafy greens like spinach, fenugreek is cooked together.

If you do not have access to mustard greens or bathua (chenopodium), then use any greens like turnip, radish, collard greens with spinach to make this saag recipe.

Sarson da Saag and Makki Ki Roti are one of the irresistible combinations served.

How does sarson ka saag taste

If you are cooking mustard greens then expect a little bitterness. This is what is sarso ka saag all about having a distinct flavor and taste great.

If you do not like the flavor just eliminate mustard greens and substitute it with spinach and follow the rest of the recipe.

Mustard greens have a unique flavor. Cooking with other greens, the bitter flavor goes away up to a certain extent. Later serving with Makki ki roti, ghee, and jaggery makes it totally a winning combination.

Indian saag is a curry cooked with mustard green or any similar greens. For example, you can choose any greens like spinach, fenugreek, turnip, radish, kale, and collard greens while making saag.

Makki ka aata or cornmeal is added to thicken the saag.

How to clean mustard greens

How to clean sarson ka saag is very important step. If not cleaned properly you may end up having dirt particles while eating.

Mustard greens are covered with lots of dirt and mud. Fill a big vessel with water and soak greens for 5-10 mins. Soaking will help to loosen dirt and later it settles on the surface.

After 10 minutes remove the greens and discard the muddy water. Repeat this process a few more times until you see the clean water with no more dirt particles. Wash with runny water one last time.

I do wash my greens a day before. I chop and keep them in the fridge for the next day. This saves a lot of time while cooking saag.

How to cut mustard greens

How do you cut sarson ka saag is another thing to take care of. It surely finalizes the final texture. Finely chop them if you do not have blender else roughly chop and blend.

First of all, cut all the thick roots from sarson or mustard greens. Clean with water and chop them finely. The same process should be repeated for other greens as well.

If you like a coarse texture then just chop them finely. This way after pressure cooking there is no need to use any blender.

In case of smooth texture just chop roughly and pressure cook. To get creamy and smoothness you will need immersion blender or grinder.

Why you will love Instant Pot Saag

The traditional way of making saag is on stovetop using pressure cooker for steaming greens and then a heavy bottom pan for further cooking.

Intant pot sarson ka saag is very easy saag recipe to make under 30 minutes. It is a one pot meal for festive occasions, lunch or dinner.

How to make Sarson Ka saag

First of all, clean and wash all the greens thoroughly.

Chop them and add in the pressure cooker, I added in the insert of instant pot.

To this add chopped radish, and chopped ginger. No need to mix all.

Add 1 cup water and set the button PRESSURE COOK. Set the valve in the SEALING mode. Pressure cook for 2 minutes.

If you are using a stovetop pressure cooker then 4-5 whistle is enough to cook.

Step-4 Open the lid after NPR

and puree it with the help of immersion blender.

NOTE if you do not have an immersion blender then let the mixture cool down and then use mixer/grinder.

Set the SAUTE mode and set the heat low. Saag will splutter at this point while cooking. Be careful while handling this. Cook for 1 min.

Mix maize flour (Makki ka atta) in ¼ cup water to make a paste. Add this paste in the saag and mix nicely. There should not be any lump. Saag will start thickening.

Cook for 1-2 minutes. Saag splutters a lot at this time, so careful while stirring it.

Cook until onion changes color to a golden brown.

Mix this tadka in cooked saag and mix gently.

Serve this delicious creamy saag with Makki ki roti and enjoy it.

Makki di roti is a maize flour Indian flatbread a bit similar to cornmeal tortilla. Here you can check how to make homemade make ki roti with step by step instructions.

Mooli laccha is also goes incredibly well with this saag.

You can definitely consume this delicious saag with wholewheat naan, roti or paratha. It will also pair well with plain basmati rice and jeera rice.

It is a gluten-free, soy-free and nut-free recipe. Replace with vegan butter or just eliminate the ghee to make it vegan. This Sarson ka saag is one of the best recipes from Punjabi cuisine. There are many popular recipes from this cuisine like Pindi chole, chana masala, chole bhature, dal makhani, aloo paratha, gobhi paratha, lassi, rajma, mooli paratha, palak paneer, naan and much more.

This sarso saag recipe stays fresh for 2-3 days in the fridge. Just microwave for a minute and it is good to eat.

In case you are required to freeze it, just skip the tempering part. After pressure cook let the saag come at room temperature and store in the freezer.

Thaw it before serving and garnish it with garlic and cumin seed tadka.

You can experiment with variety of green to make

There could be few reasons if your sarson ka saag turns out to a little bitter in taste.
1. make sure mustard greens are cooked with spinach and bathua in 2:1:1 ratio. If bathua is not available then replace it with other greens or simply spinach and mustard greens.
2. Cook them properly for good 4-5 whistles in an Indian pressure cooker or 2 minutes in IP.
3. Add maize flour, it will not only help in thickening the serso ka saag but also will balance the flavors.

What is sarso ka saag called in English?

Sarson is the Hindi term for mustard and Saag means green. In English, Sarson ka saag translates to mustard greens. Saag is always named after the greens used in the recipe. For example, palak saag, kale saag, collard green saag.

Is sarson ka saag healthy or what are the benefits of mustard greens?

Sarson ka saag is very healthy due to using mustard greens, spinach, and bathua. Spinach is iron-rich and mustard green is a great anti-oxidant. Read here the health benefits of mustard greens.

What is the difference between saag and palak

What can I eat with sarson ka saag

It is served best with Makki ki roti smeared with ghee, gur(jaggery), and radish salad.

How to thicken sarson ka saag

Maize flour or makki ka aata used to thicken the sarson ka saag. You can also use corn flour to make it thick and creamy.

How to remove bitterness from Sarson ka saag

Mustard greens have a mild bitter taste due to which it is cooked with other greens like palak, bathua and methi. Also adding a tempering of aromatic garlic and cumin makes it so flavorful and lip-smacking.

Can you freeze sarson ka saag

You can freeze the saag for 2 months in the freezer, without doing tadka (tempering). Pressure cook the greens and purre. Let it cool down.
Once it is cool down to room temperature, store in freezer-friendly bags and keep in the freezer.
Thaw the saag before serving and add tadka.

Here are a list of Instant Pot Recipes which are beginner friendly as well. 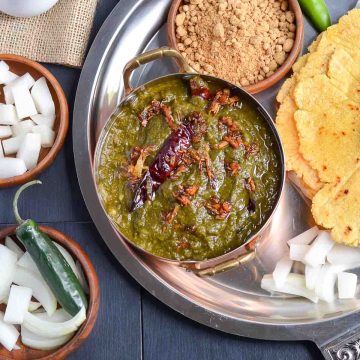 To thicken the saag